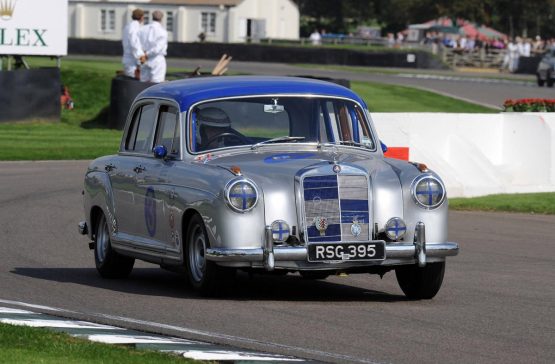 Rarely in the historic racing arena does such an opportunity such as this come along; an opportunity to invest in one of the longest associations with a world-class event on record: Two mighty Mercedes-Benz historic Touring Cars that are synonymous with the fabled Goodwood Revival meeting.

This is the second of two outstanding Mercedes-Benz historic Touring Cars that shares the same long-term ownership and the superior race preparation that is synonymous with the reputation forged by Richard Miles of Tipton Garage.

This 1958 ‘Ponton’ 220S is a rare factory RHD model, sourced at great cost by its racer-owner who is an acknowledged Mercedes-Benz collector and marque expert. The Mercedes-Benz W180 (as its production code was named) was one in a series of Mercedes-Benz models to informally receive the “Ponton” nickname. This was in reference to the unibody-type, pontoon-shaped exterior styling which was also featured on the later W128 production models. The 220S, had an upgraded version of the proven 2.2-litre inline-six due to the use of twin-carburettors and was available with a 4-speed column shift manual transmission.

Having been built expressly for use at the Goodwood Revival and HRDC ‘Touring Greats’ Series, which shares its Series regulations with Goodwood, the meticulous race preparation by Tipton Garage took into careful account the various enhancements allowed within these well-thought out regulations. A permitted engine capacity upgrade of 25% allowed the use of a W123 2.8-litre engine, driven through a 4-speed gearbox of the same vintage. The upgraded power unit was rebuilt to precision tolerances, along with the rare manual gearbox, by Stephen Miles at Tipton Garage. Before returning to the family business, Stephen was a development engineer for Janspeed’s Touring Car programme and built Janspeed’s race-winning BTCC engines. To hold such a noticeable increase in power, a much needed limited slip differential was added to the Ponton’s drivetrain.

Following FIA Safety regulations for historic cars, a custom-built full roll cage was added, along with all the necessary safety equipment recommended by the FIA. In line with Goodwood’s particular insistence on presentation of saloon cars at Goodwood, the build retained the factory steel wheels, expansive wooden dashboard, door cappings and full interior with door cards. The attention to detail given to this car ranks it, along with its ‘Fintail’ racing stablemate, as one of the best presented cars at the Goodwood Revival and has caused the visiting Directors of Mercedes-Benz to enthusiastically praise this car’s impressive appearance.

Since being built in 2008, this impressive and believed unique historic Touring Car has been a veteran of all the Goodwood Revival St. Mary’s Trophy races that feature Touring Cars from the 1950s.

Legends of motorsport who have shared the drive with the owner in this car at Goodwood have included Desire Wilson, Jochen Mass, Jürgen Barth and the great Brian Redman. In addition, this ‘Pontoon’ racer has been a welcome participant in the prestigious HRDC ‘Touring Greats’ Series for pre-’60 Touring Cars and will surely remain, along with the Goodwood Revival, to be so in all future events. Rarely does such an opportunity come along to buy into such a dynasty of historic motorsport. After two decades of racing historic cars, the owner/racer is now hanging up his helmet and allowing another, hopefully equally enthusiastic, custodian to race this true upholder of the Silver Arrows tradition.