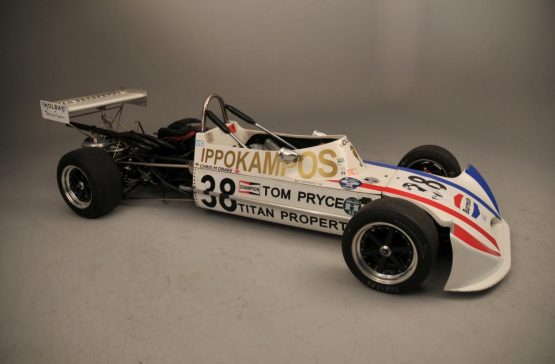 1974 March 743 chassis 24, newly built engine with 1 race last year at the Monaco Historique 2014, this car was invited to 2010 and the 2012 Monaco Historique, this car won the 1974 Monaco GP F3 race by 9 seconds with Tom Pryce driving. This win was directly responsible for Tom driving with the Shadow F1 team starting his F1 career……in the following year he put a Shadow on pole at the 1975 Monaco GP.

In 1974 Tom Pryce was with Rondel Racing which was Ron Dennis and Neil Trundle, Tom was due to race in a Token F1 car in the 1974 GP but a month before the race the Monaco admin refused him saying he had a “lack of experience” Ron Approached Tony Vrozopoulis who owned Ippokampos Racing and was running 2 March 743’s one driven by Buzz Bazaglo chassis 24 and the other by Hani Wiano, Tony agreed to let Tom drive chassis 24 at the 74 Monaco gp which he won thus giving him his drive for Shadow, so this car started Tom’s career, it is a great car to race, consistently has finished in the top 5 in front of much newer cars, new gearbox, full Nigel Rees report and set up, extremely well prepared and as was in period, renewed HTP’s, new starter and ring gear, new shocks, on the button and ready to race.