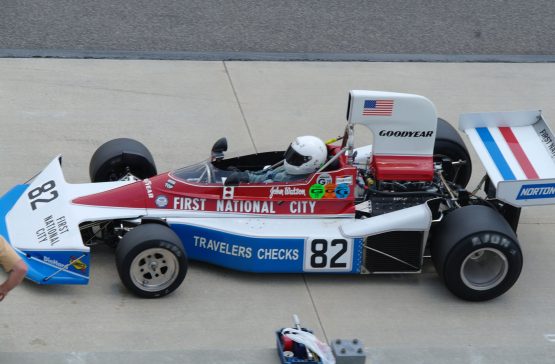 Roger Penske took part in Grand Prix racing for just over two years, from the next to last race of 1974 through the end of the 1976 season. In that time they built and raced three Formula One cars, PC-1 (actually a modified March chassis), their first true Grand Prix car, PC-3, and the Grand Prix winning PC-4.
PC-1 ran the last two races of 1974 and the bulk of the 1975 season. It was replaced by my PC-3, chassis 01, which was to make its race debut at the United States Grand Prix in October 1975. After qualifying well, in the top half of the field, during Sunday morning warm-up it developed an electrical problem that could not be fixed. A PC-1 on display in the hospitality area was pressed into service and finished 9th! PC-3 did not make its actual race debut until 1976.

Chassis 01 was the more successful of the two chassis, scoring a 5th place in South Africa. Chassis 02 competed twice and DNF’d both times.

The next race was the Swedish Grand Prix and marked the debut of the PC-4, the most successful Penske Formula One chassis. It not only won the Austrian Grand Prix, it also finished in the points three more times, third twice and sixth once. At the conclusion of 1976 Mr. Penske focused his efforts on Indy car racing in the United States.

My car, after it’s retirement, was driven by Derek Bell for Hexagon of Highgate in the Shellsport International Series in 1977, forerunner of the Aurora Series. It was them stored by Jac Nellerman and then sold to Howden Ganley. He sold it to Alan Baillie who restored it and drove to the 1991 HSCC Historic Formula One (precursor to the TGP) championship. Included in the Mr. Baillie’s PC-3 race resume is winning the only full 3 litre Formula One event ever held in Ireland, at Mondello Park in 1990.

Doug Mockett bought it in 1992 from Baillie and had raced it until 2011 in the United States. It has been fully restored to original condition by Phil Reilly & Company. Reilly was at the 1975 U.S. Grand Prix and photographed the car. Penske Restorations has been helpful for advice as well.

The highlight of Mockett driving the PC-3/01 was winning the Vintage Auto Racing Association (VARA) 1998 Formula One championship. Other highlights include competing annually at the Monterey Historics and driving it in exhibition at the United States Grand Prix at Indianapolis in both 2000 & 2001.

I Chris Drake have raced the car at Monaco 3 times scoring a best for me of a 6th place first time out in 2012 in a thoroughly wet race. Professional driver Michael Edwards won the 2008 Monaco HGP in the car. It has raced at the last 8 of the 10 Monaco Historique GP’s and always gets invited.

The engine was rebuilt last by Geoff Richardson at a cost of 45,000gbp to include a brand new Richardson DFV block, there is approx 500 miles left on the engine, it has a number of spares to include front wishbones, spare spark box, steering rack, CV joints, master cylinders, 21 gear ratios to include special low ratio first for Monaco. New Crown and Pinion to the gearbox in 2015, recent crack test from May 2016 and done every 2 years previously, new drive hubs both sides and one spare, 2 new drive shafts plus one spare, it has one spare rear wing, one chisel nose with aero wings, 3 Penske Shovel noses and 1 March shovel nose, there are a full set of wets wheels and tyres, full set of slicks wheels and tyres, and a full set of spare wheels and tyres to which include pair of Penske front wheels.