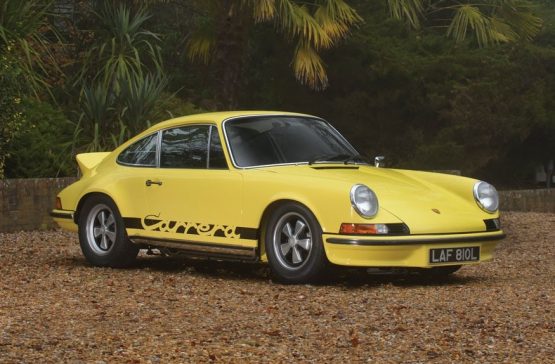 One of the most desirable Porsches ever produced, the 1973 911 Carrera RS was built to allow Porsche to continue its success in motorsport following the retirement of the 917. The Grand Touring Championship Group 5 with a 911-based model called the RSR. To meet the FIA’s production requirements, Porsche would have 500 shares of a Group with a maximum of 3.0 liters. Using the 911 S as a starting point, the Carrera RS boasted numerous changes in an effort to reduce weight and add power. Weighing just 2,370 pounds, the Carrera RS boasted a speed of 150 mph and a 0-60 mph time of just 5.5 seconds.

One of the most desirable, first 500 Carrera RS examples built, Chassis number 9113600305 was built to M472 Touring specification and originally finished in Light Yellow, destined for its home market of West Germany. Built in December of 1972, it was outfitted with Recaro sports seats with head rests, seat belts, and retractable antenna and loudspeaker. Its first owner was a prominent German industrialist who owned the car from 1973 to 1996. During his ownership, the original gearbox was replaced and upgraded with a limited-slip differential gearbox, a factory option available at the time. Also during his ownership, the car was refined to Carrera White with red script and upgraded to M471 Lightweight configuration.

The Carrera RS was then sold to a significant collector in Japan and was restored by him during his ownership. Purchased by its current owner in 2014, It was decided that the car would be restored by a specialist in the United Kingdom. Over the course of 650 hours, the car was painstakingly put back to its original M472 Touring specification and returned to its proper Light Yellow paintwork. It was confirmed during the restoration that it retains its matching-numbers chassis and engine, and still retains its proper 0.8-millimeter thick bodywork as found on the first 500 Carrera RS examples. Andy Prill of Prill Porsche Classics.